How stupid can you get? 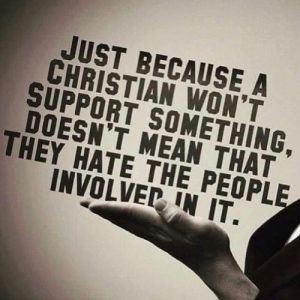 I recently read something on Facebook that made my blood to boil.

It was a statement that Christians don’t hate people because they don’t support something.

Now how stupid is that? The first thing that made me mad is that they are too chicken to write out same sex marriage but everybody knows exactly what they mean.

I’ll show you how stupid it is, it’s like a member of the KKK would stand up and say that they don’t hate people, the just don’t support their color.

The second thing that made me mad is that they take the liberty to meddle with other people’s business. Who the fuck do they think they are? Don’t give a fuck and you will see that the world will be a better place, okay?

And don’t tell me god or the bible makes you right, you just cherry picking a book full of nonsense. I thought that the new testament would render the old one obsolete? Apparently not when it comes to hate people, then you pick and choose just what you like. I’ll bet you still have gravy to your meat and eat shrimps so how do you know what to do? Ah yes, you love gravy and shrimps but hate gay people.

If someone want to take away your toy guns you will get mad and scream about the second amendment and that they violate your rights. How strange is it not that you yourself love to violate other people just because you feel like it.

So no stop lying about that you don’t hate people, you do. You are also an ignorant selfish little shit who do not dare to stand up for your wacko opinions.